The Sound of Crete | Original Senses

The Sound of Crete

The roots of Cretan music are buried deep in the past. According to Greek mythology, when Zeus was born in Dikteon cave, up in the Cretan mountains, the Curetes danced, stamped and beat their shields to drown out the new-born’s cries and protect him from harm.

Cretan music bears traces of the many civilizations who have inhabited the island over the ages: Venetians, Saracens, Turks, and the Byzantine Empire. The Cretans have combined and elaborated these cultural influences to create their own distinct musical traditions: the rizitika (‘rebel’ songs performed in the White Mountains), erotokriti (folk songs based on a 16th century love poem), and mantinades (witty, topical, often satirical rhyming couplets). There are mantinades for every occasion; you’ll even hear children practising them in the playground. The poetic lyrics, expressing joy or despair, are part of the eternal story of Crete, passed on from generation to generation.

Quite a different proposition to the bouzouki music of the Greek mainland, Cretan music has a wild streak, by turns solemn and ecstatic. The main instrument is the lyra, a three-stringed lyre made of mulberry wood. Masterfully played by local virtuosos, a single theme is repeated in infinite variations, often accompanied by the laouto (lute). 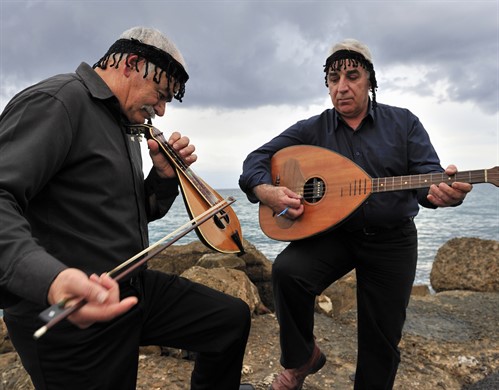 Those who don’t sing or play, get up and dance. On Crete, there are so many traditional dances —Maleviziotis, Pentozalis, Sousta, Syrtos and Syganos—  it’s enough to make your head spin. Just like Zorba the Greek.

Cruising the Cyclades in Style